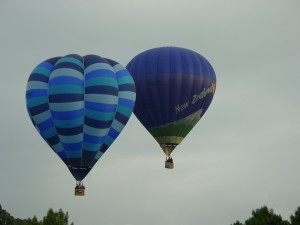 We arrived in Auckland on April 9 only to read that the annual hot air balloon festival was happening in Hamilton, April 9-13. We did not want to miss this event. So on April 11, we boarded a train to get us and our bikes out of the city. About 30 km south of Auckland city centre, we began cycling the 100 km to Hamilton. This premier hot-air ballooning event is an icon for the region and now one of the largest of its type in Australasia. In the early morning hours of April 12 (6a.m.) Gary and Janice walked the 4 km to the park where the morning balloon inflation was taking place. It was a spectacular site. Shown here are two balloons from New Zealand