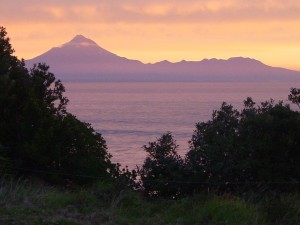 Mt. Taranaki/Mt. Egmont is the dominating natural feature of the North Island. The massive cone of this mountain, a dormant volcano, that looks remarkably like Japan’s Mt. Fuji, rises some 2518m above the lush green dairy pastures of the countryside. Taranaki is the traditional Maori name for the volcano and Egmont is the name James Cook gave it in 1770 in honour of the Earl of Egmont who had encouraged his expedition. In 1986 the NZ government ruled that Mt. Taranaki and Egmont are both official names for this volcano. We photographed this beautiful sunset from the west coast town of Mokau. And so glad that we did because as we cycled around this mountain clouds moved in and we did not see it again