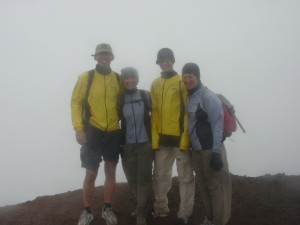 On Sunday, March 2, we joined hundreds of others on the Tongariro Crossing. This 17 km tramp (hike) is claimed to be one of the Best Day Hikes in New Zealand. It began on a gentle gradient up the Mangatepopo Valley to a steep climb to the saddle between the active volcanoes of Mt. Tongariro and Mt. Ngauruhoe, across the South Crater and finally climbing up to Red Crater, the highest point (1886 m) on the trek.

We stopped long enough to snap this photo. Then we descended down to Emerald Lakes (a group of water filled explosion craters), over Central Crater to Blue Lake (an old vent), sliding around North Crate to the Ketetahi Hut. At the hut we were able to eat our lunch, dry off and thaw near the warming stove. The rained ceased as we continued down through native forest. We can only look at postcards and read about the sites we visited as we were not able to personally view them due to the inclement weather conditions