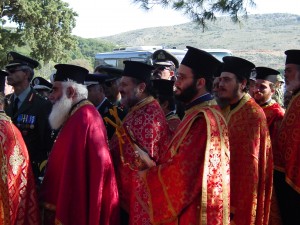 On November 9, we had the opportunity to participate in the holiday ceremony at the Arkadiou Monastery.
The monastery became a national sanctuary in honor of the Cretan resistance.

November 8 is a day of commemorative parties in Arkadi and Rethymno. The explosion did not end the Cretan insurrection, but it attracted the attention of the rest of the world.The Arkadi Monastery is located in the Rethymno regional unit, 25 km southeast of Rethymno. The Monastery is situated on a rectangular plateau on the northwest side of Mount Ida (Crete), at an altitude of 500 m. The Arkadian region is fertile and has vineyards, olive groves and pine, oak and Cyprus forests. The plateau on which the monastery rests is surrounded by hills. The west side of the plateau stops abruptly and falls off into gorges. The gorges start at Tabakaria and lead to Stavromenos, to the east of Rethymno. The Arkadian gorges have a rich diversity of plants and native wildflowers.