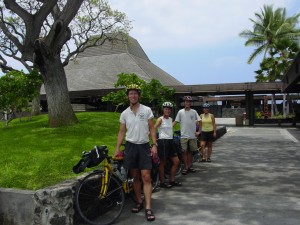 After spending three days on the Island of Oahu, retrieving lost luggage, we flew to the Island of Hawai’i (May 14 2003) Hawai’i’s BIG Island. This Hawaiian island is home to South Point the southernmost point in the United States. We are leaving the Kona Airport for our first day of cycling on Hawai’i! Up until two weeks ago we were to be in Taiwan during these two weeks cycling and visiting with friends. But because of SARS our flight was rerouted directly to Honolulu Hawaii from Auckland, New Zealand.